The Battle Colosseum is the final stage of Mighty No. 9, and becomes accessible after clearing the Prison and the Robot Factory. Trinity is the boss of the stage. Just like the City, the Robot Factory, and the Prison, this stage is located in California.

Once Beck neutralized Nameless and M.O.M. and Call and Dr. Sanda talked to Dr. Blackwell, it became became clear to everyone that Trinity was the one behind both the virus and the robot uprising. After learning that she was using the Battle Colosseum as her base of operations, Beck had Aviator airlift him inside and fought his way through Xel-laden corridors full of shifting platforms and renegade robots to reach Trinity. She assumed two different forms to fight him - Trinity Cloud and Trinity Wurm - but was ultimately defeated, causing her body to explode and exposing a spherical core. Touching it allowed Beck to reconstruct Trinity's humanoid body, restoring her to normal and bringing the robot uprising to an end.

In her first form, Trinity Cloud, Trinity attacks by disassembling Xels from her body to use a projectiles, then reassembling them into herself in the opposite direction. In her normal state, Trinity is completely invulnerable to any form of attack, but she will shrink and become vulnerable partly through the first phase of any of her attacks, then regrow and become invulnerable again partly through the second phase.

In her first attack, Trinity will hold her position in the lower left or right corner of the area, from which she will fire clumps of damaging Xels in the opposite direction of herself. Each clump of Xels will emerge from one of four points and fly in a straight line until it collides with and phases through the wall. The Xels that emerge from the bottom location must be jumped over to avoid, while the Xels that emerge from the lower middle location can be either jumped over or dashed under. The Xels that emerge from the upper middle or highest location will safely float over the player so long as they remain on the ground, but can pose a threat to the player should they remain in midair for too long after jumping to avoid Xels fired from either of the lower locations. Careful use of the Quick Fall can help to avoid this. Upon completing this first wave, Trinity will begin to reabsorb the Xels into herself by inhaling them back to herself from the wall. The Xels emerge from the wall in the same location that they went in during the first phase, starting with the last fired and ending with the first, but otherwise are exactly the same as those of the previous wave. Successfully dodging this entire attack will award a "Fine Play" bonus the first time it is performed.

In her second attack, Trinity will float toward the upper left or right corner of the area, raise three sections of the floor on the opposite end of the room to varying heights, then float in a straight line to the opposite end of the room while rapidly dropping Xels from herself and lowering the raised floor sections as she passes them. One of these sections of the floor will always be high enough to allow the player to successfully jump and AcXelerate over Trinity, while another will always be positioned to allow the player to easily climb to the highest section. The third and lowest section may or may not be beneficial depending on its location. As the sections visibly glow before raising, the player can avoid becoming trapped by standing on one section before it raises and jumping to another should it rise above their own. The second phase of this attack is exactly the same as the first, aside from initiating at the opposite upper corner of the room and Trinity reabsorbing Xels rather than dropping them. The only significant difference is that the the floor sections may raise in a different pattern than those of the the first phase.

After losing half of her health, Trinity will add a third attack to her move list, during which she will hold a position in the center of the room, raise the floor on both sides of herself in a "V"-like shape, release Xels in a clockwise or counterclockwise spiral (whichever is opposite the player), then reabsorb them in the opposite direction. The player must use the raised sections of the floor to maneuver around Trinity during this attack to avoid damage.

After her health is completely depleted in the Trinity Cloud form, a short cutscene will be triggered before Trinity transforms into her Trinity Wurm form. In this form, only damaging her head will deplete her health bar, but her lower segments can also be attacked and destroyed to avoid damage and make the head an easier target.

Her first attack in this form is to simply advance across the room to deal damage to the player on contact. To avoid damage, the player must weaken Trinity's lower segments so that they can be safely dashed through and absorbed, or jumped over when only her head is left. Upon losing a segment, Trinity will turn around on the spot and advance in the opposite direction. The fewer segments she has left, the faster she will move, reaching maximum speed when only her head remains. The segments do not need to be damaged in any set order, and successfully absorbing all of them at once will award the player a "Fine Play" bonus. If Trinity reaches a wall without losing a segment or is reduced to her to only her head, she will phase through the wall and begin another attack. Trinity will always have four lower segments upon emerging from the floor to use this attack.

For her second attack in this form, Trinity emerges from the floor in the center of the room, raises the sections of the floor on both sides of her in a "V"-like shape, and begins spewing clumps of Xel from her head in arcs to either side of her. She will spew Xels in either a narrow or wide arc, causing them to possibly land on any of the four raised floor sections. However, destroying the two lower segments that she emerges with for this attack will limit her range, leaving her unable to reach the further two platforms when only her head remains.

After losing half of her health in this form, Trinity will begin to use her third attack. For this move, Trinity will raise four sections of the floor below herself in the shape of a stairway, emerge from the wall in an upper corner of the room and fire a continuous spiral of Xels as she descends along it, lowering the raised floor as she passes by it. As each floor section lowers, another raises on the opposite end of the room to form another stairway. Once she reaches the floor, she will transition to strafing across it and firing her beam upwards, again raising and lowering floor sections to form another stairway on the opposite end of the room to herself. Finally, she will transition to moving up the wall and firing, lowering the floor sections on the opposite end of the room as she passes them. Trinity will momentarily cease firing the continuous spiral of Xels in the middle of each movement along the walls or floor before, allowing the player a short opportunity to pass by them unharmed.

Upon being defeated in her second form, Trinity will emerge from the ground and raise floor sections as if initiating her second attack in her Wurm form. She will deal light on damage on contact, but promptly fall limp and explode into Xels, leaving only her harmless core to float in the center of the room. Dashing into Trinity's Xel core will end the battle. 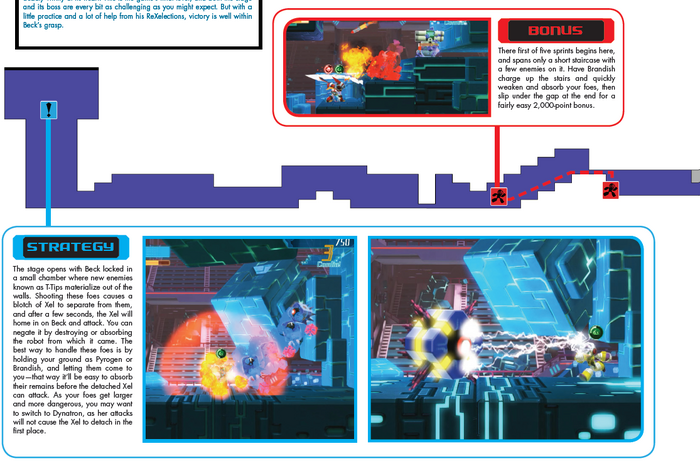 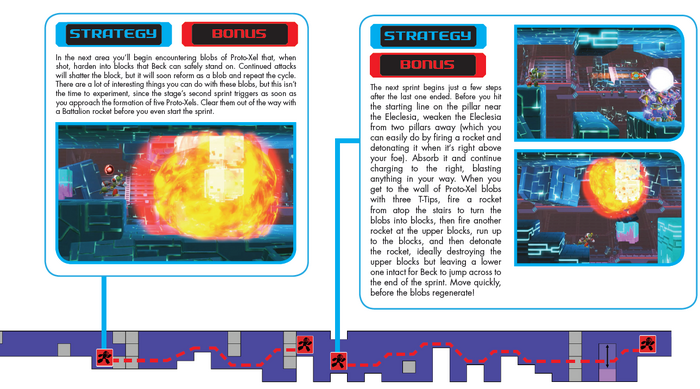 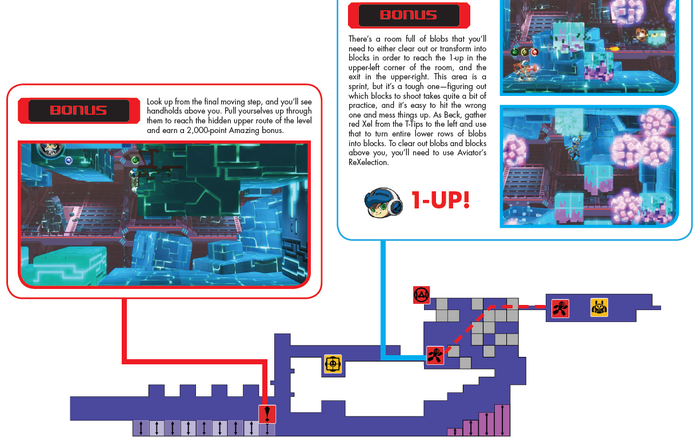 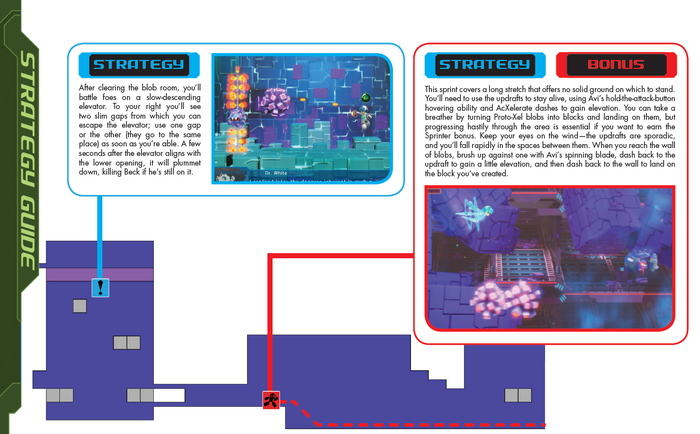 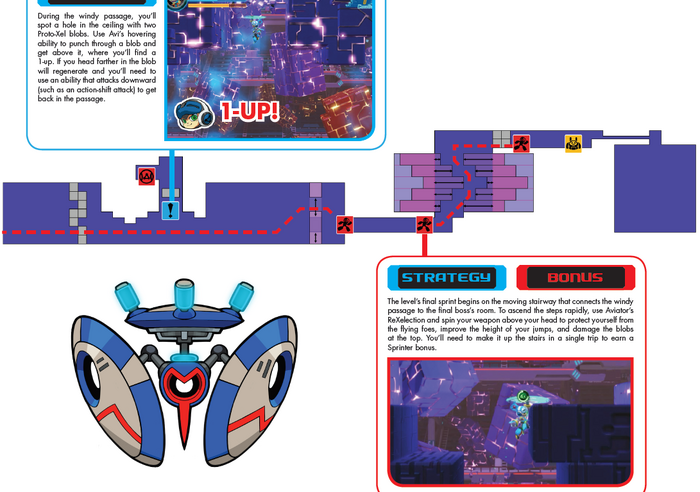 For information, please visit this.

Retrieved from "https://mightyno9.fandom.com/wiki/Battle_Colosseum_(Stage)?oldid=10675"
Community content is available under CC-BY-SA unless otherwise noted.