View source
watch 01:21
'Mighty No.9' Lore: Battalion
Do you like this video?
Play Sound

"Base capturing robot specialized in mid-range to long-range bombardment. Utilizes a Gatling gun for crowd control and a head-mounted revolver for bombardment. Demonstrates high faculty for tactics and strategic planning."
- Stage Select Description

Mighty No. 5, Battalion, is the fifth robot in Dr. White's Mighty Numbers line. He is the main boss of the Military Base. You obtain the Remote Cannon attack from him (Or Gatling Shot, if playing in the Ray DLC).

Battalion's body is based around artillery, particularly machine guns. His main body is green, with red arms and green legs with red covers. He has a yellow spiked weapon on his right arm and a long, yellow-green machine gun on his left arm. He has the number "05" written on his right leg in the same font as Aviator had the "06". He is 305cm/10ft tall, and weighs 600kg/1323lbs.

Battalion went berserk along with the other eight Mighty Numbers. He took over an abandoned Military Base in an attempt to raise an robot army and invade the city.

When he is defeated, he will be ordered by Dr. White to assist Beck in the Mines. He will help by destroying drills and clearing a path.

He will also appear in the Robot Factory stage with all of the other Mighty Numbers to assist Beck.

While affected by the virus, Battalion will behave like a stereotypical war sergeant, insulting Beck throughout the stage and urging him to fight on.

After he is defeated, he becomes less aggressive, but keeps his stereotypical military speech pattern.

Battalion has a large arsenal of heavy weapons. He can use the Gatling gun attached to his left arm or fire missiles from his legs. He can also use the spikes attached to his right arm to hang from the ceiling.

Battalion's most devastating ability is the missile he can fire from the revolver on his head. The projectile hits with a great amount of force, and can be attached to surfaces. Battalion is capable of later detonating the missile, causing a large explosion.

Battalion's development was first started when the team wanted to make a boss with a heavy military weapon theme. Inafune decided to base him on the Gatling gun, as it is a personal favorite of his and "packs a lot of aesthetic impact" [1] (In fact the kanji characters GA-TO-RI-N-GU are across the top of the design image.) Battalion's design was originally quite humanoid and complex, until Inafune felt that he needed simplified. He urged the team to go from a human design to a robot that looks like a Gatling gun with limbs. At this point, the team decided to establish the concepts of the other 8 bosses first. Going from his rough silhouette, they brainstormed more and decided to create the design he currently holds.

In Mighty Gunvolt Burst, Battalion now has the ability of separating his body parts, allowing him to attack from different directions (similar to Asroc's special attack from Azure Striker Gunvolt 2). And he can also summon enemies into the battle.

Early concept art of Mighty No. 5

Inti Creates Ideas for Mighty No. 5

Comcept ideas for Mighty No. 5 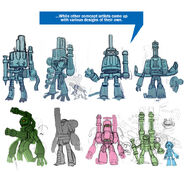 Other artists' take on Mighty No. 5

Community content is available under CC-BY-SA unless otherwise noted.